This second installation of the #GoodReads series on equity curates documentaries that explore racial disparities, discrimination, and other widespread injustices in America’s criminal justice system. Read the first post in the series, which looks at podcasts, here.

Documentaries are the perfect way to lift the veil on these issues because they offer in-depth analysis without losing sight of the human story. The American criminal justice system has been widely criticized, in part due to its high rates of incarceration. The United States incarcerates more people per capita than any other country in the world. Despite representing only 4.4 percent of the world population, it is home to 22 percent of the world’s prison population.

The role of racial discrimination in mass incarceration is well-documented. For example, although Whites and Blacks use and sell drugs at the same rate, Black people are jailed for the offense ten times more than White people. One in three Black men and one in six Hispanic men can expect to be jailed in his lifetime, compared to one in seventeen White men. The misconception is that this is due to Black and Hispanic people committing crimes at higher rates when in reality it has everything to do with racial bias. 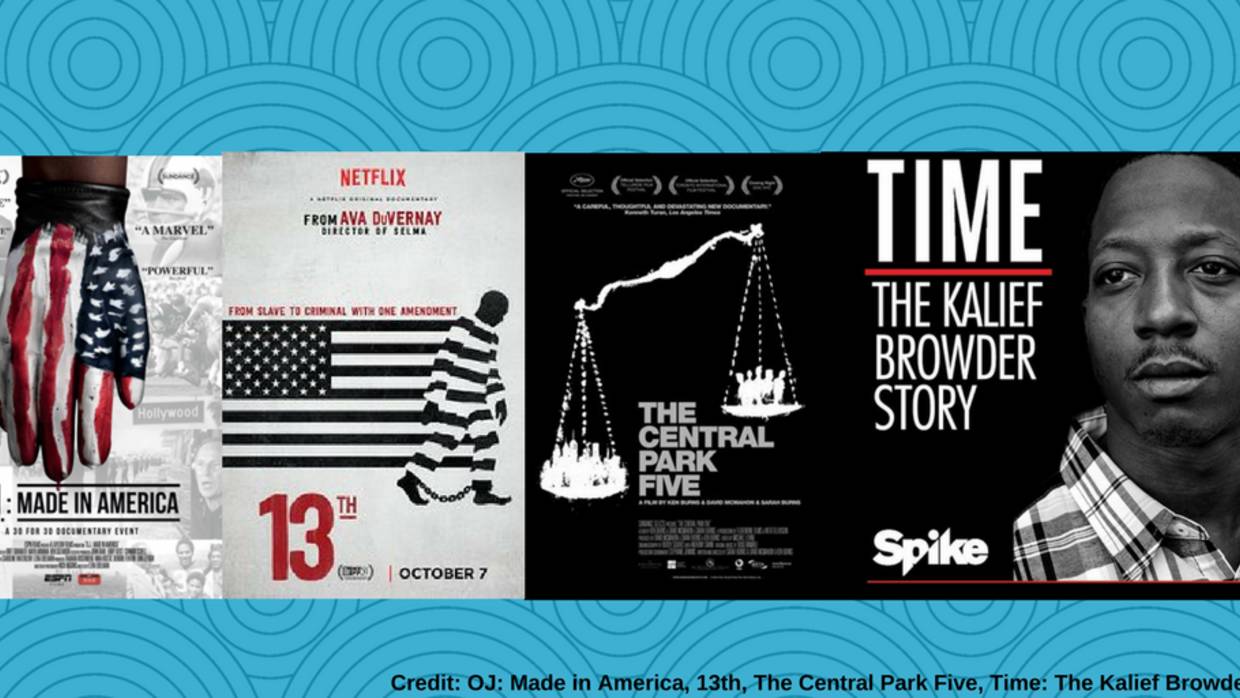 My experience in watching these documentaries was one of surprise and sadness at the state of the criminal justice system, as well as empathy for those who it negatively affects. These documentaries delve into personal accounts while also taking a look at the system as a whole, offering analysis of its biases and injustices.

Created by Ava DuVernay, this documentary features many prominent figures like Angela Davis, Cory Booker, Van Jones and Henry Louis Gates Jr. One of my favorite parts of this documentary is when Angela Davis tells part of her own story of struggle during the Civil Rights Era which, personally, really put the current struggle for justice and civil rights into perspective.

These stories show how explicit racial oppression was the norm not too long ago, and shed light on the fact that, as a country, we still have a long way to go to make our systems truly just and equitable. This must-watch documentary is really compelling and provides an overview of the prejudices that black and brown people face in the criminal justice system

Living Cities’ own podcast, Voicing Race, was inspired by this documentary.

The documentary can be found on Netflix.

Produced by Jay-Z, this docuseries features the story of Kalief Browder, a 22 year old man who was arrested when he was 16 over a stolen book bag and was imprisoned for 3 years without trial. He was placed in solitary confinement for extended periods, a practice which damaged his psyche and ultimately led him to take his own life.

This story is especially heart-wrenching for me because it’s based on a young man who lived only a few blocks from where I grew up–right around the corner from where I attended high school. To me, this was a prime example of the ways in which the criminal justice system fails black and brown people daily. Instead of focusing on rehabilitation, the system often breaks people psychologically, making it difficult for many to reenter society successfully.

The series can be found on the Spike TV website.

Directed by Ken Burns and based on the infamous case from 1989, The Central Park Five tells the story of five young black men who were wrongly accused of a crime they did not commit and details their persecution by the media and society broadly. The racism embedded in media coverage of the case was central to the wrongful conviction of the five men, influencing the public’s opinion of the accused and creating a drumbeat for revenge.

The real perpetrator came forward twelve years after the end of the trial, finally proving the young men’s innocence. It’s amazing to realize how these young men were unjustly tried, pressured into false confessions, and ultimately convicted, especially considering the fact that there was a complete lack of evidence against the boys.

It’s terrifying to consider the number of people sitting in prison who were wrongly convinced, robbed of large pieces of their lives like these men were.

The documentary can be found on multiple streaming services, including Netflix and Amazon Video.

OJ: Made in America

The most in depth analysis on this list of criminal justice and how perception of race plays a huge part in verdicts is OJ: Made in America. Many documentaries and adaptations of this story have been made but this one is by far my personal favorite. It’s a five part series which makes it easier to understand the nuances of the case and how race played a huge part in OJ’s verdict.

From the way OJ viewed his own blackness to the ways in which his lawyers used his race and celebrity in their favor, this documentary gives viewers a better understanding of the split between black and white Americans about OJ’s guilt and elements in the broader culture like the Rodney King incident.

The series can be found on Hulu.

I encourage all readers to use these resources to better understand some of the hidden disparities that exist in our society. Tools like these help challenge misconceptions about crime, race, and the justice system, but it’s what we do with these tools and the actions we take moving forward that will create change.