Knowing what I know now, I realize that I went into my freshman year at Penn State lacking competency on the state of racial equity in America. I was, for the most part, unaware of the many systematic and intentional forces working against people of color. It wasn’t until my second-semester African American Literature class that I began to expand my thinking and started seeing the world through a racial equity lens.

Literature is a powerful medium for telling stories that humanize. Books give readers the ability to see into someone else’s lived experiences and intersectional identities, particularly those who are subject to injustice. The books we read in this class were transformative to my understanding of race–so much so that my commitment to racial equity work is due in large part to these works of literature. 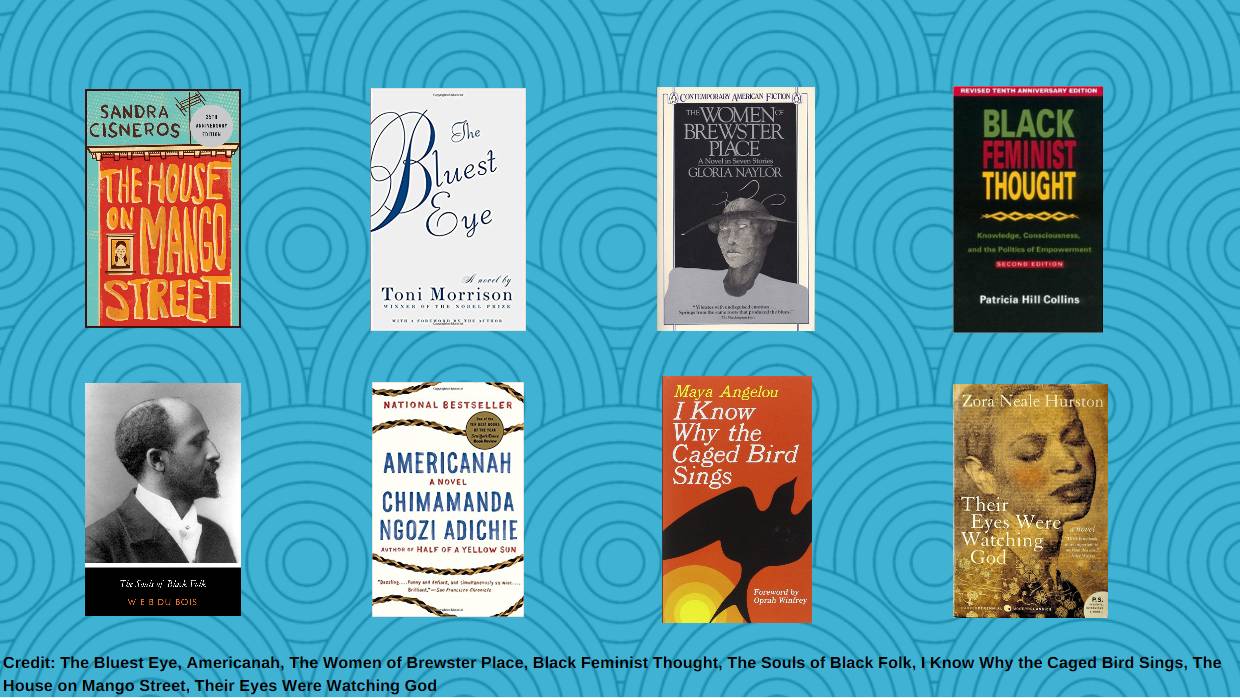 I Know Why The Caged Bird Sings by Maya Angelou

An easy and insightful read, Angelou allows us to experience her childhood through this autobiographical novel. This book is one of my favorites because of its raw approach to storytelling. Following her journey of self-definition was empowering given the many tribulations she overcame.

Race manifests itself in every aspect of the novel but mainly through the socialization that Marguerite, the main character, endures in order to safely navigate white society in the American South.

Their Eyes Were Watching God by Zora Neale Hurston

Hurston navigates themes of race, womanhood, liberation, voice and gender roles in this novel. Janie Crawford, the novel’s main character, is a young and beautiful black woman who gets a lot of attention for her physical features. The novel is pioneering in that it gives Janie a voice which allows her create her own identity beyond that of the male gaze and ideas of womanhood in the early 20th century. While it takes her a while to find that identity, her journey to becoming a woman who does not conform to being subordinate proves her strength and intelligence.

The Women of Brewster Place by Gloria Naylor

This novel tells the story of several black women living in an inner city neighborhood. Naylor brings to life disparities between people of color and white people in the inner city. She breaks down the root causes of the disparities that exist for people who live in similar conditions and beyond that shows how the debilitating forces at play–environmental racism, sexism and homophobia intersect and manifest in each of the women’s lives.

Beyond that, the book explores black womanhood in relation to motherhood, othermothering—the act of a woman caring for children who are not her own–sexual orientation and gender norms.

The Bluest Eye by Toni Morrison

Another personal favorite of mine, The Bluest Eye follows the main character, Pecola, through her childhood. We’re given a look into what standards of American beauty can mean for young black girls and the effects of those distorted and unrealistic ideologies. The novel also highlights Pecola’s mother story, which depicts the frustration and internalized self-hatred many women of color are vulnerable to due to economic disparities that are out of their control.

The House on Mango Street by Sandra Cisneros

This short novel tells the story of a young Latina and her experience in her under-developed neighborhood. It is a depiction of the shame many people of color experience because of their background. In this case, the main character, Esperanza, feels shame in her home and neighborhood because of its poverty and physical appearance. She dreams of a life beyond the few blocks she roamed as a child only to later feel responsibility to reach back from those who weren’t able to make it out like she did. This is something that resonated with me as I’ve felt these same feelings of shame but, like, Esperanza, chose to remain and elevate my neighborhood and have learned to appreciate its resilience and vibrant culture.

The Souls of Black Folk by W.E.B. DuBois

W.E.B. DuBois, in this collection of essays, calls out the immorality of American society in the early 20th century. In this book, he advocates for African Americans and pinpoints all of the ways in which society continues to hold the community back. He puts forth progressive ideas like improving access to education. He’s also critical of Booker T. Washington’s complacent approach to race relations, which was to conform and remain separate just as long as white people allowed black progress, with an emphasis on advancement through agriculture.

DuBois asserted that, while Washington’s work is significant to African American history, it stunts long-term progress. DuBois calls for advancement through education and equality. This is a great read for those seeking a more sociological approach to understanding inequity.

A longer read, but worth the time commitment, is Black Feminist Thought. It was my introduction to Black Feminism and the need for it. It provided analysis how black women have unique struggles that many white women might not experience. It stresses the need for intersectionality in feminism due to the fact that women, depending on their race, gender identity or expression, sexual orientation, etc. have a different experience of the world and oppression. Acknowledgement of these experiences is central to creating a more just society for both women and men.

Drawing loosely on her own experience immigrating to the United States from Nigeria and being struck with the label of Black American, Adichie writes about this navigation of racial identity through the novel’s protagonist, Ifemelu. Other themes covered include the politics of black hair, privilege, race and identity. This is a contemporary novel that offers a lot of cultural references that are very relevant to our society today.

I hope that these books can help reframe and challenge some of your own ideas about the state of race equity in America. I encourage you to also reflect on your own biases as you read these works and open yourself up to understanding these diverse experiences.

To take it a step further, share your favorites from these foundational books with your own network to expand the understanding gained from these works.